Unitarian Universalism affirms and promotes seven Principles, grounded in the humanistic teachings of the world’s religions. Our spirituality is unbounded, drawing from scripture and science, nature and philosophy, personal experience and ancient tradition as described in our six Sources.

Across the globe, our legacy reaches back centuries to liberal religious pioneers in England, Poland, and Transylvania. Unitarian Universalism grew from the union of two radical Christian groups: the Universalists, who organized in 1793, and the Unitarians, who organized in 1825. They joined to become the UUA in 1961. Both groups trace their roots in North America to the early Massachusetts settlers and the Framers of the Constitution. Both religions have long histories and have contributed important theological concepts that remain central to Unitarian Universalism.

Originally, all Unitarians were Christians who didn’t believe in the Trinity of God (Father, Son, and Holy Spirit), but in the Unity, or single aspect, of God. Later, Unitarian beliefs stressed the importance of rational thinking, a direct relationship with God, and the humanity of Jesus. Universalism emerged as a Christian denomination with a central belief in universal salvation; that is, that all people will eventually be reconciled with God.

Since the merger of the two denominations in 1961, Unitarian Universalism has nurtured its Unitarian and Universalist heritages to provide a strong voice for social justice and liberal religion. Today, Unitarian Universalists include people of many beliefs who share UU values of peace, love, and understanding. We are creators of positive change in people and in the world.

It may be surprising to some to discover the names of famous women and men who have been Unitarians and Universalists. Some, like Thomas Jefferson, continued to worship in more orthodox communities while holding Unitarian views. Others may not have belonged to any congregation but voiced strong Unitarian or Universalist principles.

You can find lists of famous Unitarian Universalists and their biographies on the following websites:

Our Symbol, The Flaming Chalice 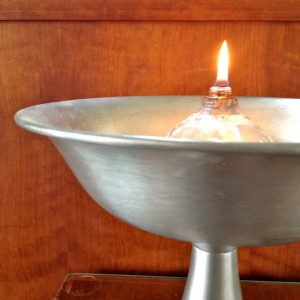 We gather this hour as people of faith, with joys and sorrows, gifts and needs. We light this beacon of hope, sign of our quest for truth and meaning, in celebration of the life we share together. Chalice lighting response at UUSMC Worship Service

A flame within a chalice (a cup with a stem and foot) is a primary symbol of the Unitarian Universalist faith tradition. We light a flaming chalice in worship to create a reverent space for reflection, prayer, meditation, and singing.

The spirit of love, truth, and liberty

Hans Deutsch, an Austrian artist, first brought together the chalice and the flame as a Unitarian symbol during his work with the Unitarian Service Committee during World War II.

The flame atop the chalice represents the spirit of love, truth and liberty. To this spirit the community bears witness and with it, hopefully, the community is filled.

The flame also has a more tragic significance. It commemorates the martyrdom of so many who died bravely in the cause of religious liberty.

To Unitarian Universalists today the flaming chalice is a symbol of hope, the sacred, the quest for truth, the warmth of community, the light of reason, and more.