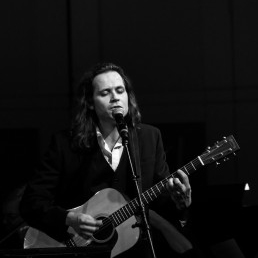 Andrew Lipke is a Philadelphia-based, South African-born multi-instrumentalist and composer active in many different styles of music.

Lipke moved to Philadelphia to pursue a degree in composition at The University of The Arts and has since gone on to become a critically acclaimed and sought after arranger, producer, composer, performer, and educator.  Andrew is driven by a passion to find the common ground between disparate styles of music and his career reflects this. He has performed as a vocalist with several prominent American orchestras (Indianapolis Symphony, North Carolina Symphony, Colorado Music Festival Orchestra) in addition to touring the country with the critically acclaimed Led Zeppelin tribute band Get The Led Out.

Andrew is currently working on a cross platform album/orchestral work based on the Herman Hesse book “Siddhartha” in addition to a number of other projects. Andrew will be performing as part of a rock trio this evening.