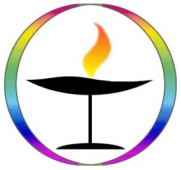 ADULT RE WORKSHOP UPDATE:
The Language of LGBTQ+
Sunday, October 13th – after the Potluck Lunch
Many of us want to address our LGBTQ+ friends as they wish to be called.  But what is the current terminology used?  How does one know which is correct in the situation?  Kurt Doan from Havre de Grace, MD will lead a workshop on the language (both antiquated and current) of the LGBTQ+ community. No registration or RSVP necessary, just drop in – all are welcome!

Kurt Doan was born and raised in a rural farming community in southern Lancaster County, Pennsylvania. He has been involved in the field of LGBTQ+ advocacy since attending Penn State and has worked in the higher education field for the past twenty-four years.  As a graduate student at the University of Arizona, he served as President of the LGB Graduate Student Alliance and became involved with the campus Safe Zone program—a program aimed at improving the campus climate for LGBTQ+ persons.  During his time in Arizona, Kurt also served as a trained crisis intervention specialist for the Wingspan Anti-Violence Project—a social service program that works to address and end violence in the lives of LGBTQ+ individuals. Kurt is currently pursuing a doctorate in higher education leadership at Wilmington University; his doctoral thesis will focus on the data invisibility of LGBTQ+ learners in community colleges.

Register for Event: The Language of LGBTQ Workshop